Cracks in the system

How the UK’s nuclear energy gap could be larger than thought. 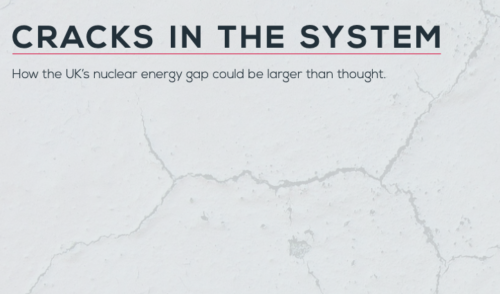 Britain may be facing a greater shortfall in low-carbon electricity generation than has previously been suggested. Not only are a number of proposed new nuclear power stations in doubt, but some of the UK’s oldest reactors have seen technical problems in the last few years that could see them having to close ahead of time.

The UK’s fleet of Advanced Gas-Cooled Reactors (AGRs) have been reliable providers of low-cost, low-carbon electricity for decades. However, they are now nearing the end of their operational lives. As they do so, safety concerns with an issue known as keyway root cracking have forced shutdowns at the Hunterston B and Hinckley Point B power stations. It is possible that one or both of the Hunterston reactors may not return to action, and that cracking in other AGRs may also prove terminal ahead of currently-scheduled closure dates.

In recent years, Government has progressively reduced its forecasts of the amount of new nuclear capacity coming online, as the cost of renewables has fallen faster than anticipated and backers have pulled away from projects such as Moorside in Cumbria. Reviews by bodies

such as the National Infrastructure Commission (NIC) have shown that the UK power system needs fewer new nuclear stations than Government has historically believed. However, none of these assessments has so far taken into account the potential for early closure of AGRs.

This report considers the impacts that would occur if all AGRs closed three years ahead of schedule, and examines four potential ways of replacing the potentially lost generation.