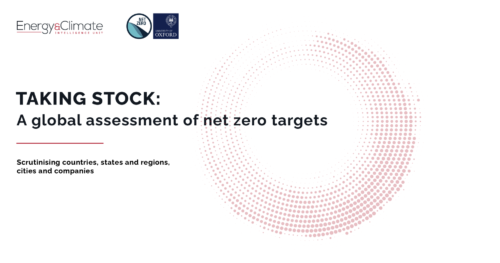 In our latest report Taking Stock: A global assessment of net zero targets we present what is, we believe, the first quantitative analysis of net zero commitments across countries, sub-national governments and major companies. Teaming up with Oxford Net Zero, we surveyed more than 4,000 significant entities: all nations; all states and regions in the 25 highest-emitting countries; all cities with a population above 500,000; and all companies in the Forbes Global 2000 list.

Together, jurisdictions with net zero targets now represent at least:

We find that already 61% of countries, 9% of states & regions in the largest emitting countries and 13% of cities over 500k in population have now committed to net zero. Of the world’s 2,000 largest public companies, at least one-fifth (21%) now have net zero commitments, representing annual sales of nearly $14 trillion. A majority of these companies also have interim targets, a published plan and a reporting mechanism, with just over a quarter meeting a full set of ‘robustness criteria’.

Our report, however, shows that net zero commitments vary hugely in their quality. While 20% of existing net zero targets already meet a minimum set of robustness criteria, or ‘starting line’ as set out by the UN Race to Zero Campaign, this still leaves major work to be done by governments and business leaders in the months leading up to the UN climate summit in Glasgow (COP26). Of particular concern is the lack of clarity around offsetting. All entities, especially companies, need to disclose how, and to what extent, they plan to use offsets. Near-term action and the publishing of long-term plans also need prioritising.

Taking Stock presents a long-overdue ‘opening snapshot’ of net zero that will allow the robustness of targets to be tracked and assessed over time. Download the full report to find out more.